“I play real sports. I’m not trying to be the best at exercising” – Kenny Powers ‘East Bound & Down’

Reclusive author Clive Javanski, Aidan, and I went running along the lakefront on the day of the Chicago Marathon. Our friend Rooney was participating in it and we decided to show our support by jogging to the post-race party.

We didn’t stalk around viewing spots waiting for him to go by while holding up “Go friend!” signs or anything like that. We knew there was going to be beer at the post-race party – Goose Island 312 Urban Wheat Ale to be exact – and we wanted some. It was an opportunity to share a cup of beer  with thousands of people from foreign countries.

Clive wore black socks – and not the athletic ones. He did, however, don a pair of hipster plaid shorts that were once pants (Clive originally thought a 5K meant “5 kegs”). Aidan and myself wore more traditional running garb, though we’re both resistant to spending a fortune on jogging gear that only gets more ridiculous.

“Rocky jogged through the Philadelphia streets wearing Salvation Army cotton sweats with holes in the ass,” Aidan says. “He came out OK. And what’s with those compression knee socks?  I’ll admit they’re hot on some women (schoolgirl vibe) but they look like dick on grown men.”

Out of all my friends, Aidan is the best runner. Better than Johnny in high school, who always had to stop and take a shit while running. We enjoy running, especially to work off the beers we drank or prepare for the ones we’re about too. And women who run get more beautiful every year. At least the ones who aren’t dry-heaving on an indoor track.

The biggest problem with the Chicago Marathon? The lines for the post-race beer were way too long. Now that we all understand runners enjoy beer, organizers must think like Lollapalooza and street festivals as far as having more than one beer booth (and while you’re at it, have a kissing booth). 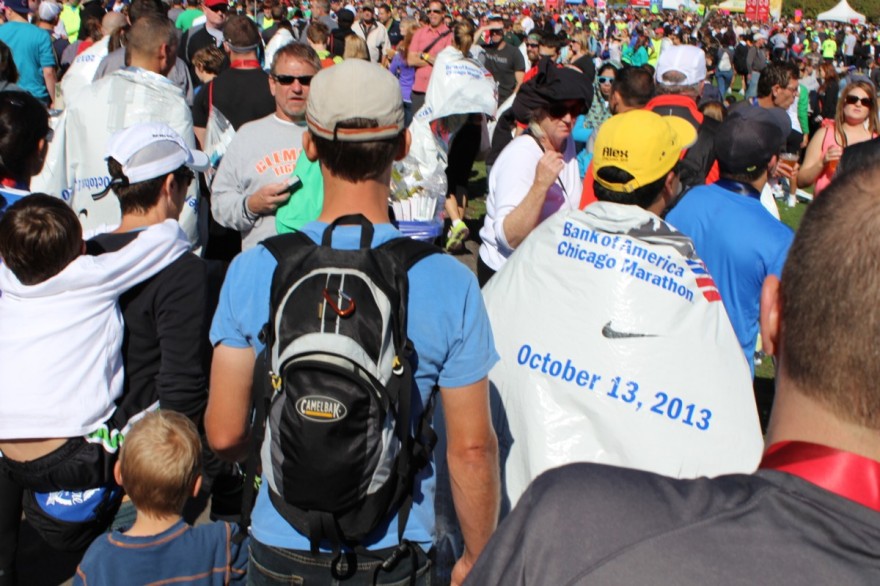 Heading into the post-race party and long lines for beer.

And Then: I took a scientific poll and asked 10 marathon runners if they could name any of the previous five winners of the race. Not one did. “Someone from Kenya” was the common reply. I’m confident to say that 98.5 percent of those 40,000 plus runners can’t name a winner. I bet some of the elite Kenyan runners can’t. I’m surprised media focuses so much on those winners when most people could give a shit. I’m more interested in coverage of the race in general, and stories with a local or national angle (something Boston-related especially). And let’s fix the post-race beer issue. Because some of us asshole runners enjoy our beer. Ya think those elite runners are sticking around for a cup of ale? No, they’re collecting their paychecks and getting the hell out of dodgy.