File this in the “Are you fecking kidding me?” drawer. Apparently a late night TV talk show will debut in Chicago this September. Supposedly the sidekick to host Michael Essany (remember him?) is a 10-foot animatronic rooster. Because a 10-foot rooster is the obvious choice when it comes to late night television in Chicago, right? I’m all for ridiculous ideas, and whatever stoner came up with this idea in the meeting might be a genius in himself. But is the show in Chicago or Farmville?

It’s going to on WJYS. I’m in Chicago and I’m not even sure what that is. Although creative has a way of coming out more in these smaller-type stations then the local affiliates of the major networks.

The show is called Seven on Ridge, and I have no idea what that means.

The host is Michael Essany. He got famous for being a kid who interviewed celebrities in his parent’s Northwest Indiana home. That was the bend, the schtick. As an adult, that bend is gone. His “adult” version of a talk show didn’t last too long when it was the E Network years ago.

Supposedly the show will have the atmosphere of a supper club, which was big in the 30s and 40s. So I guess it makes sense for 2012.

There’s a list of potential guests for the show on the website. Mila Kunis is on there. I’ll watch Mila chat with anyone, whether or not there’s a looming 10-foot rooster or black swan nearby.

The announcer for the show’s promo says New York and Los Angeles has held the flags down for too long in late night TV. Now it’s “Chicago’s time.” But a giant fucking rooster, really? In the country’s 3rd largest market? I’m all for crazy. But there’s good crazy and bad crazy. 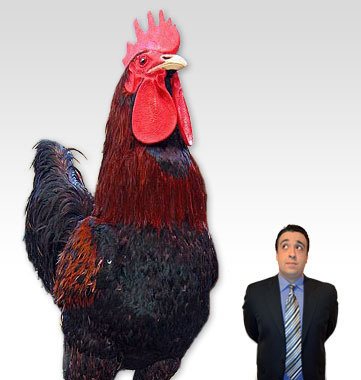 Yea, this is a good idea (sevenonridge.com)

I’ll bet my pants this show got the idea for Kaka (that’s the rooster’s name – get it?) from Craig Ferguson’s animatronic robot skeleton-sidekick Geoff. 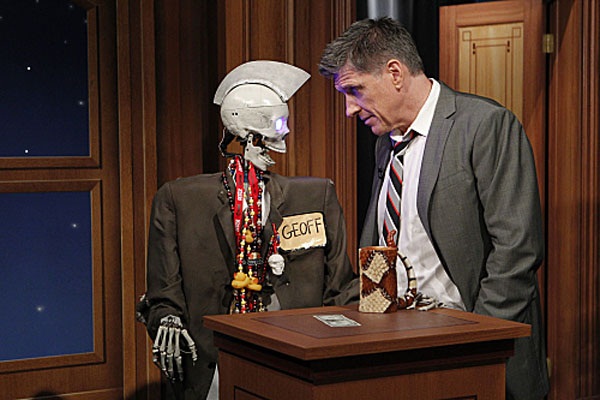 I was never that crazy about Geoff, but Craig makes it work. At least they could cart Geoff around when they take the show on the road. Don’t think that would work with Kaka, although it would be a good fit if they film the show in an Indiana cornfield.