Aidan reviewed Depeche Mode’s Chicago concert a few months ago, so I thought I’d have him review something else. He chose the fashion documentary film Bill Cunningham New York.

First off, the film is a few years old. Why now?

I’ve been in a documentary kind of mood. Especially after watching HBO docs like Seduced and Abandoned and the one about that New York film director who was pregnant or something. I came across it while I was looking for something to watch on Hulu the other night. It was free to, unlike a lot of good films on there. By the way, the one thing that sucks about Hulu – they go to a commercial break when someone is in the middle of a sentence. Bastards.

I remember when it first came out. I was intrigued, as I have interest in the New York fashion scene, especially since (don’t laugh) The Devil Wears Prada.

And we both loved HBO’s How To Make  It In America about those two dudes in the fashion scene. I think when I first heard about Bill Cunninghham New York I thought it had something to do with that blogger guy, The Satirist.

I think you mean The Satorialist.

So what’d you think of the film?

I think we both agree that our favorite scenes were those of Bill and his production guy, John Kurdewan.

They could just have a camera on those two for 30 minutes each week and I’d watch it. It would be better than most of the drub that’s out there. I will also ask…is it wrong to be sexually attracted to Anna Wintour? I might be.

The guy was constantly on his bike. I’d say the majority of the movie is him cruising the streets of Manhattan on that bike. ‘Cause that’s what he does. I kept waiting for him to get hit – and I think he did hit a cab in one scene that was actually tape of him like 20 years earlier. Going into the film I didn’t know if this guy was still alive. I half thought that the movie ends with him getting killed by a truck. Kind of like that movie you wrote about, The Wall, where you just anticipate that dog dying. That was Bill on the bike.

What was one new thing you learned from the film?

Couture. Actually, I still don’t know what that word means. There were some weird dudes in the film. One guy had all these outfits he was trying on. He looked like The Riddler in one of them. If The Riddler was gay and lived in the Garment District.

A question came up from the filmmaker, who asked Bill if he was gay. Bill kinda says he’s not gay or straight. That he’s only into his work.

I’ll tell you what. Anyone who says that, or denies he’s one or the other? I’d say that’s bullshit. But not Bill. I actually believe him. I wouldn’t be surprised if he didn’t have a penis or a vagina. I don’t even think he had a bathroom in his apartment. He’d be like that vampire girl/boy in Let The Right One In.

That’s something you won’t see in an Ebert review.

You know what the hell I mean.

I like that one part where he uses duct tape to fix a tear on his cheap blue jacket. It reminded me of the time I did the same thing for the crotch of my costume pants after that Halloween party last year in Wicker Park.

So what would you rate the film, on a scale of five draft beers?

I’d give it four and a half draft beers. I liked it. I’d give it an extra half beer had Anna Wintour said something naughty in the film. 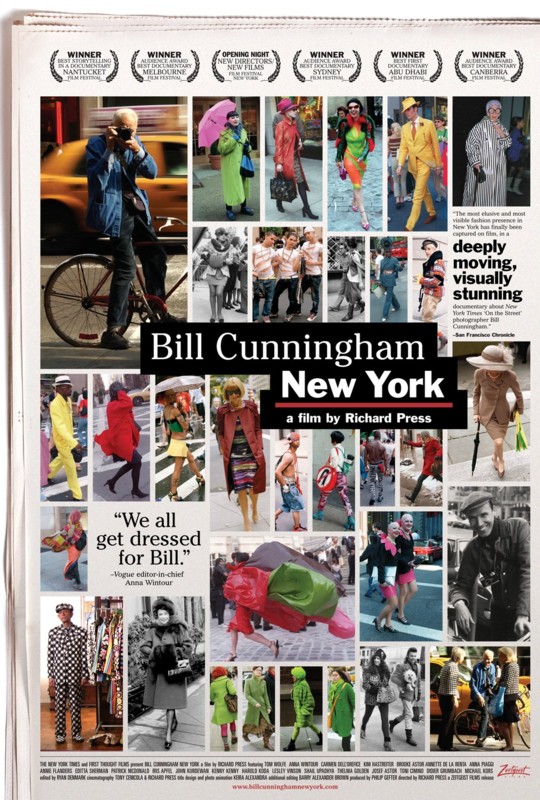 Saying Goodbye to “How To Make It In America”