I’m just going to start it this way. A few years ago I was YouTube searching for a Christmas song. It was just before the holidays. I’m always looking for something new (or old) that I have not heard yet, Yule-wise. That’s when I came across My Favourite Time of Year by The Florin Street Band and was intrigued by all its Victorian Englandness. And I wasn’t alone. I’ve mentioned this song/video in previous Christmas-themed posts. Now the mastermind behind it all talks to The Dodgy about it.

There are several reasons why Leigh Haggerwood decided to write My Favourite Time of Year and follow it through with a Victorian-themed band and music video. For Haggerwood, as a child in the late 70s and 80s, Christmas songs and the Christmas “No. 1” were something to get excited about. The chart countdown after lunch on Christmas day was something his entire family gathered to watch. “As an 8-year-old kid I remember getting goose bumps when I heard Christmas songs on the radio, and they were very much the soundtrack to the season; making British Christmases quite magical,” he says. “As the years passed and the music industry became watered down and more and more orientated towards TV talent shows, I thought it was really sad that nobody seemed to write new Christmas songs anymore and that we’d been listening to the same ones for thirty years.”

Haggerwood says this was highlighted when people started to protest against the X Factor by buying non-festive songs and he thought it was sad that kids today don’t experience the same anticipation and excitement he did.

“The other aspect is that I think most songwriters and composers have a go at writing a Christmas song at some point in their careers,” he says. “They’re very hard to write because they’re full of clichés, so a strong melody is key. I found it challenging and I knew that I wanted to write something in a traditional style, and go to town on the production with real strings and a choir, instead of using samples which are so often used due to budget constraints. I could imagine the Victorian music video as I was writing the song, and I was convinced that the concept could work. So when I’d finished the song I approached the major record companies. Sadly, they didn’t share my enthusiasm.”

They liked Haggerwood’s song and  idea but told him it would be too big of a risk in these days of illegal downloads and weren’t prepared to back the project. They play it safe these days; finely grooming new artists and spending very little on things like music videos. “My  idea of an elaborate Victorian winter wonderland seemed ridiculous to them and they gradually all turned their backs on me,” he says. “However, I’m not one to be beaten.”

After overcoming cancer at the age of 26, facing death, enduring a lot of painful chemotherapy and surviving, Haggerwood came out the other side with a real sense of optimism and a belief that anything is possible. “I realised that life is short, and that you have to make things happen and do the things you believe in,” he says. “So I formed my own independent label, Calmsound, and used my life savings to fund the recording and the video. As the ball started rolling, people started to get excited and wanted to get involved. I ended up on set with over 100 cast and crew, some of which were at the top of their game like cinematographer John Perez, who normally works with the likes of Coldplay and Beyoncé. It was as if the whole thing was meant to be, and I am so glad that I took it upon myself to go for it in such a big way, despite the amount of stress I went through.” 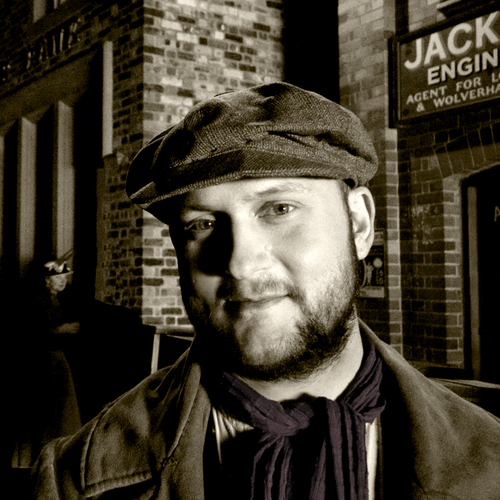 Haggerwood says while the project hasn’t recouped the costs involved, it has been a great success in terms of people’s response to it. Last Christmas a young lad wrote and told Haggerwood that he suffered from depression, had been feeling suicidal, and was planning on walking the streets alone at Christmas so his family wouldn’t have to suffer him being around. “He said that when he watched the video, it filled him with so much joy that it made him want to be with his family at Christmas for the first time in years,” Haggerwood says. “I’ve had messages from war veterans, widows, people who have suffered great sadness and losses, who have said that after watching the video they could feel the happiness and positivity of the season once again. This has blown me away, and as I see more and more renditions of the song posted on YouTube, by young children, schools, theatres, choir  etc., I’m just amazed at how much it continues to touch people around the world.”

Haggerwood is planning on writing an upbeat, party-orientated Christmas song one day, but probably won’t make an entire album of original Christmas songs – for now. Over the past year he’s been developing a Florin Street musical which ends at Christmas with My Favourite Time of Year, so the songs are mostly winter-themed and they tell the story of  his character Travis (Haggerwood’s alter-ego in the video) and his musical journey. “I have to be careful not to overshadow My Favourite Time of Year until it is better known, but the new songs are coming on well and I hope to have a Florin Street Band album out in the near future,” he says.

The song is now the theme to Text Santa, a new Christmas charity event run by the UK’s largest commercial TV network, ITV, which is due to take place again this year – meaning that it will be heard by millions of people. “I may be travelling to America to promote the song because there has been a lot of interest from radio networks and TV over there, but those plans haven’t been finalised yet,” he says. “Basically, I’ll be in costume promoting The Florin Street Band as best I can.”

My Favourite Time of Year is currently being put forward to the major film studios. “I would love it to be included in a film and the instrumental version is proving very popular with TV producers, so hopefully it will it get a big break and reach a wider audience soon,” he says.

Haggerwood has  been discussing the possibility of developing a Florin Street musical animation with the original animators of The Snowman.  “The animation would include 8 to 10 new songs and have the feel of the intro sequence to the video; really magical and quaint,” he says.  It will be aimed at families and I believe that it could become a modern-day snowman that will be watched every Christmas.

Haggerwood on his video alter-ego.

“I made a very silly home movie with my family a few years back and for some reason I called myself  Travis Shenanigans,” he says. “There was a scene that I kept mucking up and we ended up with about ten minutes of funny outtakes as I knocked at the door introducing myself as Travis Shenanigans over and over again with a daft Scottish / Irish accent. The home movie was terrible but those outtakes are really funny, so when I got my costume together for the music video, it was an in-joke between myself and my close friends and family who’d seen the clips. Also, my mother’s side of the family are originally from Ireland so it was a slight nod towards my Celtic family history.”

Blists Hill Victorian Town is very popular with fans of the music video. “It’s one of ten museums run by the Ironbridge Gorge Museum Trust, and they’ve been very supportive of the whole project and welcomed me to their Victorian Christmas fair each year,” Haggerwood says. “I really hope that any success of the song and video will encourage people to visit the museum in the future because they are quite a remarkable charity welcoming over 100,000 school children through their gates each year. It’s a beautiful part of the country and I first visited the museum on a school trip as a kid back in 1984.”

The dark-haired girl in the video is a model named Romany. The director decided that Haggerwood’s character should have a love interest in the video and they filmed a number of scenes where they caught each other’s eye and smiled at each other. “It didn’t really work and were eventually left out, but because Romany looked so good in the video, the director, Nick Bartleet, decided to keep some of her scenes in,” Haggerwood says. “As a result, lots of people ask who she is, and all will become clear when the Florin Street story is finished – she’s Travis’ childhood sweetheart, and she doesn’t know he’s returned to Florin Street.”

Once things take off and we have a few more songs, Haggerwood plans to perform live with The Florin Street Band. And as far as the obligatory beer question, he says all the British ales served in the New Inn pub go down well. “Travis is also quite partial to spirits – all of which result in a sing-song on the piano.”