My favorite Black Friday memory was making out with a Sears sales girl in the changing room. Her name was Tahlia. She could open a bottle of beer with her teeth and I liked her. This is what happens when you work a Black Friday and roll in at odd hours after eating, drinking and partying the hours before.

I’ve done my time. I’ve worked retail and restaurants. I know. Working Black Fridays. Dealing with thieves, hooligans, perverts. And that’s just the co-workers. I worked mostly in home improvement and we didn’t have to deal as much with the insanity. Not too many people were rushing in at 5 a.m. to buy a water heater or can of paint. But one year – damn, one year – they put this special toy shop near our department. I think it was Kaybee Toys. They had their own employees but customers were allowed to bring items from there to our registers. Mad Mel, the smoking clown I mention in this post, didn’t like that. Mel was pissed off selling his own shit – tractors, snow blowers, hoses. Now this grown man with a beer belly and cigarette-weathered face was selling Barbie dolls. I loved it. I took pleasure in Mel’s misery. I played the happy elf and he didn’t like it. Once some little kid was whacking him in the leg with some foam thingy. I think Mel called him “a little cock.”

Once during the holiday season I volunteered to dress up as some Disney character and walk around the store greeting kids. I think it was a cross promotion Sears had with Disney. I just remember being some animal of some kind with a tail. I walked by Mel, in costume, and flipped him off. Tahlia was my guide and whispered dirty things in my giant ear.

Back to the subject of changing rooms, it seems every time I go in one these days there is a guy in another room trying things on while his wife/girlfriend walks in handing him clothes and telling him what looks good and what doesn’t. Every time. They’re having this conversation like it’s their own bedroom. I feel like I’m intruding. I want to walk out and ask the gal, “does this underwear makes my thighs look fat?”

Once I worked a Black Friday this octogenarian named Bud. He was the paint expert. He used to paint ships in the Navy. He used to always tell me to get away from the main aisle and “stop looking at the young puss.” That one Friday I accidently hit him in the leg with a paint cart and he had to go to the hospital. Sometimes I had fun crank-calling him from another department, disguised as a customer and asking if he sold outdoor ceiling paint or brushes for left handers. 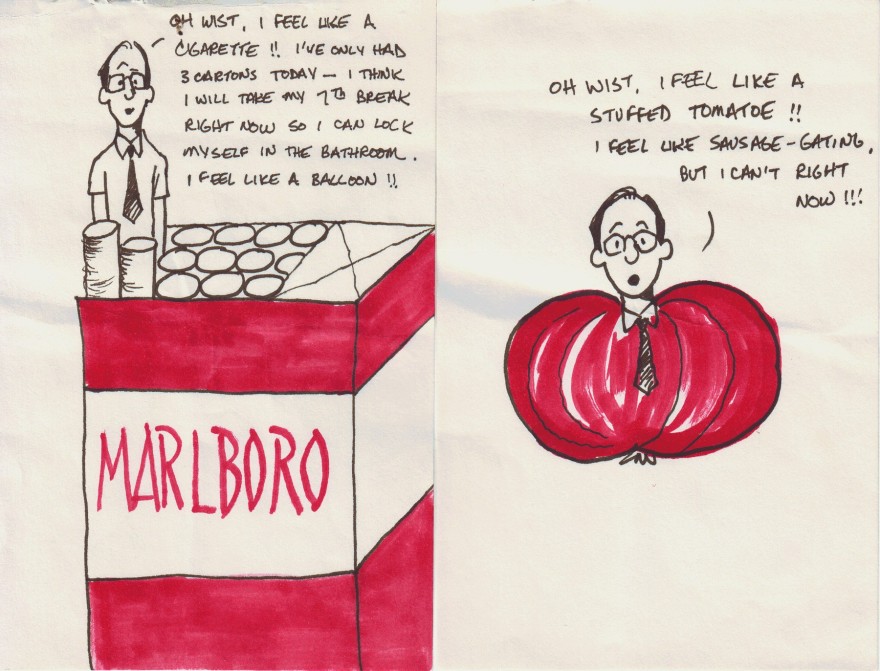 Maybe I’ll run the entire comic one of these days.