Irish Week in Chicago usually begins with the South Side Irish Parade, which is the Sunday before St. Pat’s, and continues with various city-wide festivities leading up the the actual holiday. This year is extra special because St. Pat’s falls on a Sunday – so it’s a full seven days of revelry.

I didn’t take many pics on what began as a rainy SSIP, but I have a few dodgy ones. I wish I had more pics of some of the women’s fashion I encountered and promise I will at the Irish Fest on Saturday up north at the Irish American Heritage Center. One thing I noticed was more women in kilts. Not the sleazy Tilted Kilts kilts (although they have their time and place), but something more fashionable like that worn by one tall, attractive brunette who wore a slanted, tartan kilt just below the knees over a pair of jeans. There were a few gals with kilts just above their bare knees but I’ve never seen one over jeans like that. I think it helped she had long legs.

One of the pics I took was of a green-dyed bearded fellow who also made the gallery of the Chicago Tribune. Another is of a scary-looking leprechaun peeking out a window. There was an Irish Batman walking around, for which I have no pic. Use your imagination. I do have one of an odd vendor with a Riddler tie.

In addition to the Irish Fest, there are a few more parades (downtown Chicago and Northside), culminating with the St. Pat’s Twilight parade in Crown Point, Ind. The path of this parade runs only several hundred feet or so from Crown Brewing, which usually has a shindig going on inside and outside.

A cross between St. Pat’s and Mardi Gras 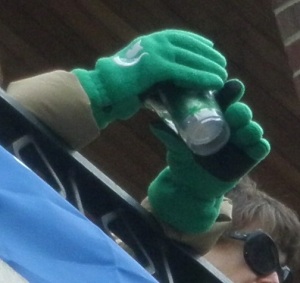 A creepy leprechaun sneaking a peek