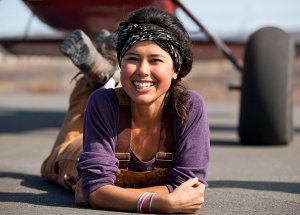 Ariel Tweto became America’s Sweetheart with the popularity of Discovery Channel’s Flying Wild Alaska.  If you didn’t fall in love with her then, maybe it was during her week-long appearance in Scotland last year with The Late Late Show with Craig Ferguson that co-starred Mila Kunis, Rashida Jones, and David Sedaris. Ariel’s been on Craig’s show probably more than any other guest. He likes her. So do we. Ariel recently talked with The Dodgy while hanging out near her North Hollywood home.

“I owe him so much. He believed in me. He watched the show. If it wasn’t for him, I would never had gone to Scotland. I’ve got a new, different fan following because of him.”

Ariel’s most recent appearance on The Late Late Show was April 17. It wasn’t planned. She was at a meeting there and was asked to fill in for a guest who didn’t show up. “I hang out in the green room every once in a while,” she says. “They’re like family. Now if a guest doesn’t show up they call me.”

Speaking of family, Ariel visits hers in Alaska about three times a month. “I’m always in Alaska,” she says. “I can’t get out of there.” Ariel said her parents, for the first time in 26 years, went on a vacation alone without their three daughters (to Hawaii). “They survived. They’re busy and loving life.” Ariel said her youngest sister, who chose not to be on the TV show, is now flying for her dad and just finished a solo helicopter flight. “She’s a little trooper.” Ariel herself is flies about once a week out of Santa Monica “to maintain the hours.” 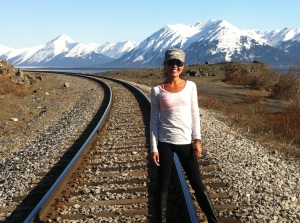 “Beer! I love beer. I like my Alaskan Ales. Lately I’ve been into stouts though. Anything that resembles Guinness.” She had a long list of favorite beers on her phone – which she lost. “It’s a good excuse to start the list over again.” She was also familiar with the Flying Dog Ale I was drinking and said at one bar where you “build your own bucket” she chose all dog-themed brews.

“Something outdoors and adventurey. Something I haven’t done before that would get my adrenaline going. Because I’m not really scared of anything. I wouldn’t want to go to a movie because I can’t sit still. I love movies, but I don’t know. You’re not talking at the movies.” Ariel says she’s single but has been on a few dates “but I end up talking too much or doing something.”

“A lot of people in LA are very metro and I just take two seconds to throw on a hat. I like manly men like in Alaska or someone who fixes things or pilots or mechanics. I don’t know. I don’t know what I like. I like Blake Shelton.”

Ariel can’t see herself settling down anytime soon and right now just wants to be the best aunt to her older sister’s kids. “I love traveling and exploring and goofing off and I don’t think that would be…maybe down the line,” she says.

Blake is her “celebrity crush” and she’s been getting into reggae and country. She also likes Elton John, Billy Joel, and “REM is awesome.”

TV favorites include the Travel Channel and Food Court. She liked Girls but wasn’t too crazy for season two because it got darker with all the OCD and “stabbing ears.”

“I don’t want to be depressed after watching TV,” she says. Movie likes include Dumb and Dumber and Breakfast at Tiffany’s. Her current favorite is The Perks of Being a Wallflower. “The book is even better.”

Ariel likes the Minnesota Vikings (her father’s from Minnesota) and is huge LA Clippers fan. Being from Alaska she has to like hockey, right? “I’m obsessed with the Penguins,” she says. “Sydney Crosby – aaaaahhh.” 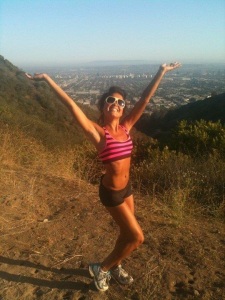 Ariel is enrolled in television and film production classes. She started college in Boston immediately after high school but then “Flying Wild” started. Then every time she tried to take classes again a new project would come along and she’d have to cancel. “My parents always said once you start something you have to finish it.”

Ariel is also taking acting classes. She’s been told she’s “too animated” and would maybe be good for Broadway because she’s loud. “I just want to do everything,” she says.

Ariel is pitching an animated series called Ariel’s View in which she plays herself, goes on adventures and is friends with animals. It’s in development and has been pitched to major networks. As far as another reality show, she’s open to anything. “Nobody knows what to do with me,” she says. Ariel says she’s not dramatic enough for those kind of shows that strive on “cat fights.”

“I just want to make people happy and give them laughter in their day. We only live once so we might as well be nice and happy and make other people happy.”

Her name comes from, of course, flying – as in aerial. Her sister Ayla was named for a character in “The Clan of the Cave Bear.”

During our interview she was stopped by someone who said she had nice hair. She believes she’s been followed before while running and says everyone lectures her about safety and stuff, including Craig Ferguson. “I’m not dingy and I know what I’m doing,” she says. “I’ve been traveling myself since I was 13.”

Ariel gets recognized once or twice a day especially in airports. “If you’re in aviation you watched the show,” she says. “If I’m talking people recognize my voice more than they recognize me. I have an annoying voice.” – No she doesn’t.

Ariel, like some of my other interviewees, is up for an idea I have called “The Pint Interviews. ” We visit a local pub and share a few pints of our favorite beverage during a videotaped interview. “It sounds like a great idea,” she says. “I want to come have a drink with you.” 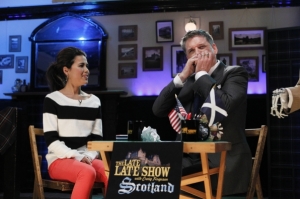 All photos courtesy of Ariel Tweto