Occupy Octoberfest on Saturday in Whiting and Crown Point was a success. We got what we demanded: Beer.

The two best Octoberfest beer gardens in the region banjaxed us by scheduling them on the same day. Oct. 8.

No worries, as we managed a scramble to both. Whiting was first because it was scheduled to end at 10 p.m., whereas CP’s extended to 11 p.m.

This year’s Whiting Octoberfest beer garden seemed bigger compared to ’10. The band was The Hat Guys, popular in Chicagoland, I’m told and a good party band. I’m not that familiar with them but they take a  lot of pics. They have a bandmember who’s instrument I think is the camera. He’s always snapping photos of the crowds (especially of himself and the attractive lady fans – well done him).

The fest was out of its pumpkin beer by the time we got there, which was still early at around 7:30 p.m. No frets, they had other  choices. But still. The same thing happened last year.

Plenty of attractive gals here, especially of the Hispanic variety. Also, and more so than Crown Point, you get more dudes in sleeveless T-shirts and  bandannas. Or bad track shorts. Definitely more blue collar compared to CP. 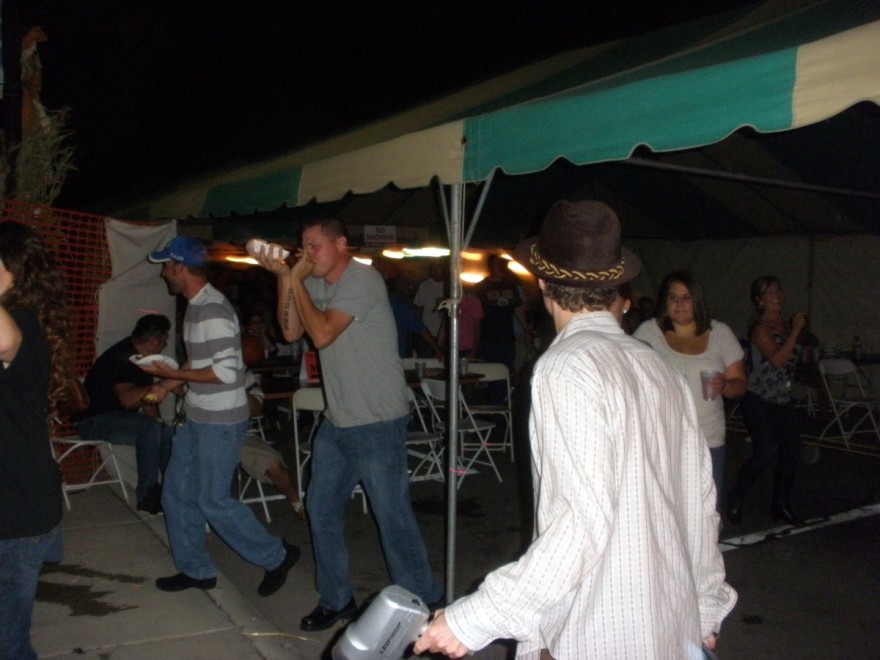 The Hat Guys and a bunch of fans doing something

Off to Crown Point. Some hard rock band and a large crowd taking over Main Street. The beer taps were waaaayyy on the south edge – a long ass walk from the music and food. Nevertheless, Crown Brewing supplied the suds, although like Whiting, they also ran out of their pumpkin beer (and the Octoberfest). Doesn’t matter if you like the IPA or Crown Light, however.

Definitely some “princess-types” at this fest. Crown Point usually draws some of the finer looking lassies at its events. Although some may say that in Northwest Indiana that’s not saying much.

All in all,  a decent closure to what I call the final beer garden of the season. Outdoor drinking may be on the way out. Time to hit the bars and talk about those.