The Jackson Fail in Gary 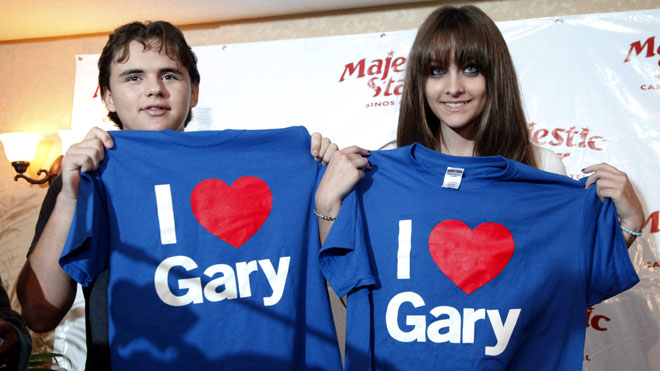 I’m not a fan of Michael Jackson. But I am a fan of odd. So when I had the chance to experience Jackson-related odd just outside Chicago a few months ago I took it. There was a lot of hub-di-do about Jackson’s mom, Katherine Jackson, and his three kids, Paris, Prince, and Blanket (!), visiting the late singer’s hometown of Gary, Indiana for a few days during his birthday celebration in August. Oh, even sister La Toya showed up, briefly. There are many in the downtrodden city who believe Jackson’s legacy is going to save the city.

There have long been rumours of an MJ shrine or museum. No. Some have predicated that Jackson’s boyhood home would “become the next Graceland.” No. But let me get into what I started here, and that is the events surrounding the “Goin’ Back to Indiana” Jackson celebration. The weirdness began when Prince and Paris accepted “I Love Gary” T-shirts during a news conference at a city casino while Katherine (fresh off her strange “disappearance” a month earlier) and Blanket secluded themselves in an SUV. Actually, they were all holed up in the SUV and it took the city’s mayor, Karen Freeman-Wilson, to coax out at least the two older children. “The kids are still shy,” she said. “They didn’t grow up in the spotlight.”

Really? Wasn’t one held over a hotel balcony by daddy that was World News No. 1?

A few days later I was at the casino when they held a dinner reception. It was advertised as having Katherine in attendance (she was) along with her children (who weren’t) and I saw one note announcing a La Toya visit (she didn’t). In fact, I think La Toya was long gone by then. She was in town with a reality TV crew. No doubt for an “I’m back home!” scene. Would she had been there without those cameras? Maybe. Probably not.

Anyway. So I ran into a few people at this dinner including a 20-year-girl who drove down from Ohio with her mom hoping to see and maybe meet the Jackson kids. Not gonna happen. I met an MJ impersonator in full character. It was a little spooky, but I will say I bet most of that audience would have preferred to see him perform at that dinner rather than the band that did (and didn’t play any MJ music – which seemed odd).

The next event was a Jackson tribute concert at West Side High School (West Side Theatre Guild). There were supposed to be two shows, one at 4 p.m. and another at 7:30. Tickets ranged from $25 to $50. Paris and Extra‘s Mario Lopez (!!!) were scheduled to host. Well, that didn’t happen. Paris did show, but sat in the audience with her siblings. But let me get back to something here.

Mario Lopez. Mario fucking Lopez. Really? Needless to say, he wasn’t there. Was he ever supposed to be? And who really gives a shit? Event organizers said Saved by The Bell  had a prior engagement. Nevertheless some idiot in there might have traveled from afar to see Mario. It was never explained to the crowd that not only would he not be there, as advertised, but that Paris would not be doing any hosting, as advertised. I even heard some talk that La Toya would perform. Well that was out of the question. I think she was back filming Celebrity Apprentice All-Star Assholes or something.

Let me mention the attendance, or lack off. You see, the 4 p.m. show was long canceled. And I think I know why. This high school auditorium for the one-and-only 7 p.m. show at a high school was at about at 50 percent capacity, maybe less.

About a month or so prior, the Jackson brothers performed nearby at the Star Theatre. From what I heard this was sparsely attended. And here they were, back in their “hometown.” Tickets were being given away for free. I knew one jagbag who attended and said the place was empty. Last year, by the way, the Star, along with its companion hotel, the Radisson (the Chateau Marmont of Northwest Indiana), attempted to sell these MJ celebration packages for several hundred to a thousand or so dollars. And for that you got to see a few local bands and MJ’s third cousin performing, or something to that effect. I don’t think that went over too well. It wasn’t repeated this year.

So does it sound like I’m knocking the Jacksons? Probably. I just think there’s a lack of sincerity here. As one local “bigwig”  told me, if the Jacksons are so interested in their “hometown” (MJ made ONE visit back during his lifetime) then why not put together some cash and build/repair some of the blighted homes in the city, including those neighboring their old house.

I just…when I read about museums and shrines, and “the next Graceland,”  – you don’t hear about some of this other stuff, however petty it seems. I think there are those who  are afraid to cast a negative light on the thing.

I met a family who drove from the East Coast for the festivities. He said at one point they waited outside the Jackson home for a few hours, hoping they would catch a glimpse of Katherine walking out. I didn’t have the heart to tell him they haven’t lived there for decades.

If I had to pick a favourite MJ song, or any Jacksons songs, it would probably be “State of Shock.” An old beastly duet with Mick Jagger.