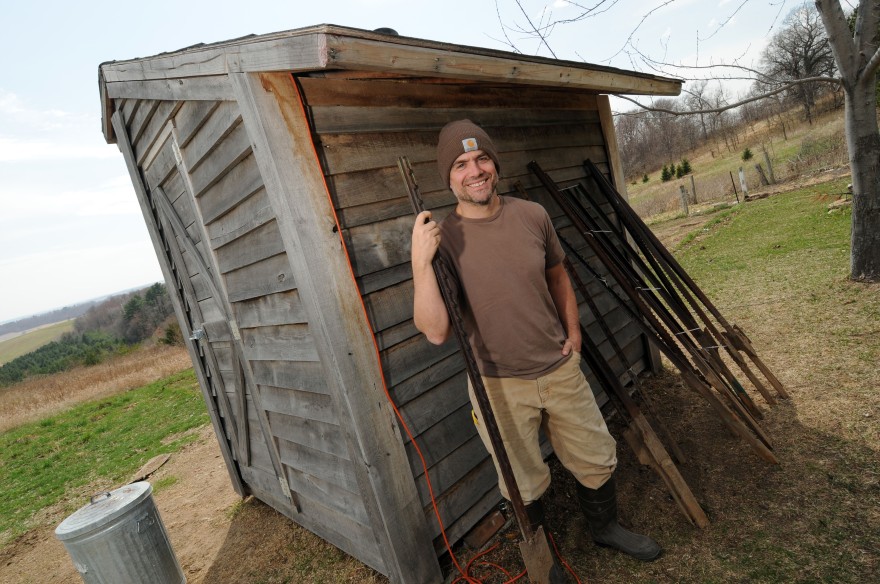 Several years ago I received a book for Christmas. Population: 485 by Michael Perry was a piece my gifter thought I’d be taken with. I was. The book about Perry’s life in rural Wisconsin, working as a volunteer firefighter meeting his neighbors “one siren at a time” became an instant favorite of mine, as were his follow-up memoirs, Truck: A Love Story, Coop, and his latest, Visiting Tom, about Perry’s compelling older neighbor whose hobby is shooting a homemade cannon. These books aren’t just my favorites. Perry is a New York Times bestselling author. He also writes essays for national magazines, hosts the nationally syndicated Tent Show Radio, and performs and tours with his band the Long Beds. Perry recently took time out too chat after a speaking and musical performance at the University of Wisconsin-Eau Claire.

Writing Origins. “I was out of college and working as a nurse and quite by accident got interested in writing by a friend who’d been doing some freelancing. I had been writing some really awful poetry and somewhere in there I wound up at the library and checked out a book on how to be a writer. I decided to give the writing thing a try and thinking if it goes horribly wrong in six months I’ll just go back to working in the hospital. That’s still kind of the plan 20-some-years later. I still have my nursing license. I renew it every two years, but I just keep writing.”

Perry was also a voracius reader growing up on his rural Wisconsin farm. His mom taught him to read early on and because he had no TV and couldn’t go to the movies, that’s all he did. “While in some cases that could be negative, in my case it was positive because my mom filled the house with books.”

The first piece Perry sold was to a local magazine and it was about dating in the country when you grow up on a farm. “All I remember was the title, Courtin’ Country Style. Very cheesy but memorable.”

Perry combines a conversational blue-collar background with a real love for beautiful language. “I’ve been criticized for it. Some people say on one hand I’m trying to act like a regular guy, but on the other hand I’m overdoing it with fancy words. My bottom line on that is why let the fancy people have all the fancy words. I think sometimes it helps to heighten the humor.”

Music and Writing. “I used to write with music on all the time. Lately, I don’t know if it’s the age or not, but I do tend to write in silence more than I used to. But I still use music. Singer/songwriters have been such a huge influence on me as a writer. People like Steve Earle, Lucinda Williams, Patti Griffin and Fred Eaglesmith – they made me think you can do art without wearing pretty clothes.”

Perry said his band evolved over time by accident. Whenever he talks about the band he likes to point out he’s not a musician. “I know some guitar chords and I write all the songs and I do the singing, but I’ve spent my last 20-25 years hanging out with musicians and writing about musicians. Out of respect to their craft I play the guitar with the all the nuance of a guy cutting brush. And I write very simple songs.”

Steve Earle is Perry’s primary influence – literary, musically – whatever. “He changed my life because I’ll never forget the first time I heard Guitar Town. It was country I could relate too. And Exit O even more so. Which is kind of when I started wondering about writing. I remember raking hay at my dad’s farm and listening to that album, thinking, hey, this guy’s a rough neck. He wears boots and is writing very beautiful, powerful stuff. No way I’m saying I’d compare myself to him, but saying he gave me this idea that, yea, a knucklehead from a farm in Wisconsin can try writing.”

Perry was in his 30s when he first picked up a guitar. He used it as a break while writing. “I tend to write in long binges. I want to take a break but not turn that part of my head off. I’d go across the room and pick up the guitar and work on a song for awhile, so eventually I had a bunch of songs written.”

Perry’s friend, a musician who is still in the band, told him to do something with the songs. Then he booked the pair at a coffee shop. “I’m not saying I was nervous, but I ripped out a 60-minute set in 32 minutes flat. People seemed to like it and it wasn’t a complete train wreck.”

Perry recorded his first album in the basement of one of the early musicians in the band – a  man by the name of Justin Vernon. Readers might know him today as Bon Iver. “He’s also on the second album singing a little harmony. I always kid people, that he’ll come crawling back.”

Perry mentions Canadian singer/songwriter Kathleen Edwards in the new book. One of my favorite musicians, a few years ago I caught a show of hers at a historic venue (The Marx Bros. performed there) in Valparaiso, Ind. She also recorded Voyageur with Iver – whom she dated. “At a couple of her tour stops she’s given away copies of my books. Voyageur – I love that album. And my 5-year-old daughter, every time she comes up to hang out in my office she puts it on.”

How’s (Visiting) Tom? “The only thing he asked me to do was change his last name. After I was done I asked him if I got everything right. He said yea, you’re fine. He said you changed my name so I’m just telling everyone it’s fiction. I said, no, Tom, you can’t say that – it’s a serious issue in a non-fiction memoir. He thought he was doing me a favor.”

Filming Tom shoot his cannon for a book promo was an all-day affair – something Perry learned Tom complained about. “I felt bad for a few weeks because I didn’t want to put him through that. Then the day before I left on the book tour I stopped by to give him his copy. In a serious moment I said I wanted to thank him because he let me write about him and his life – that I appreciated it and don’t take it lightly. I also said I felt bad about the video and I appreciated his time because it really helped get the word out. He says, ‘oh yea, did you see that thing is up over 6,000 hits on YouTube?’ He’s been clicking on it to see how it’s doing.”

If you go to his website, you’ll see a picture of a treadmill desk Perry recently purchased. I didn’t know they existed. “It’s the most embarrassing thing ever and absolutely brilliant. I’m 48 now. I’ve always kept myself in relatively good shape. I’ve learned the hard way that 25 years of sitting is really awful for you. I’m having some of the same problems my brother the logger is. Well, that doesn’t make sense. He should be breaking down long before I am. Yesterday I walked six-and-a-half miles while I wrote. I’ve lost ten pounds and I feel good. It’s ridiculous. I cringe when I look at it. I can’t believe I have one but it’s been terrific and I’ve been amazed at the writing I can do. A rough draft I can crank. I still like to sit down at the desk when I line edit and revise because I just like to have the pen and paper and all that.”

Perry has two books under contract. One is a young adult novel “that sadly lacks vampires and/or unicorns.” Look for it early next year. He’s also working on another nonfiction memoir-type book about the French philosopher Montaigne. “Nibbling on the edges of philosophy and thought but also trying to equate it to day-to-day life. The opening scene right now – whether it will survive – is about me telling how last summer I tested an electric pig fence by grabbing it with my bare hand. Not the way to go about it really.” 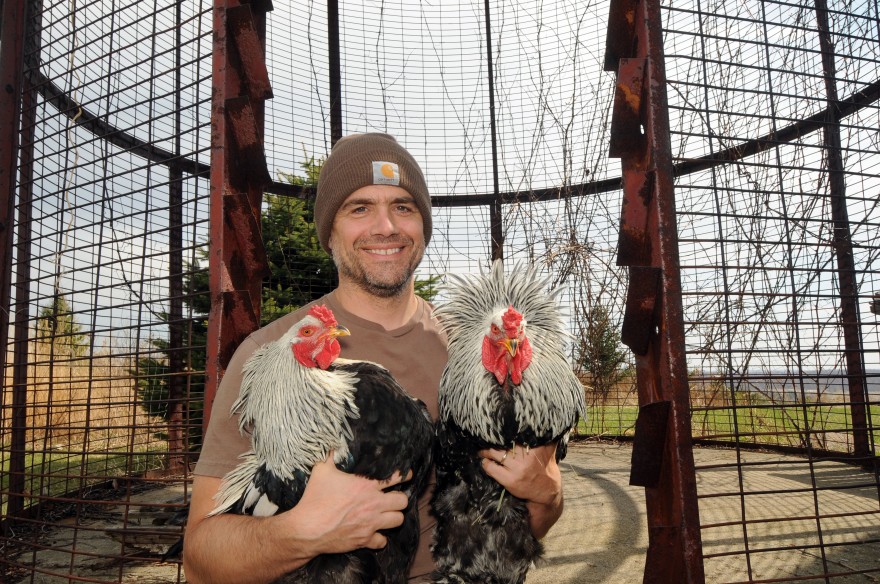 Michael Perry on the farm

For more on Michael Perry visit his website at sneezingcow.com.